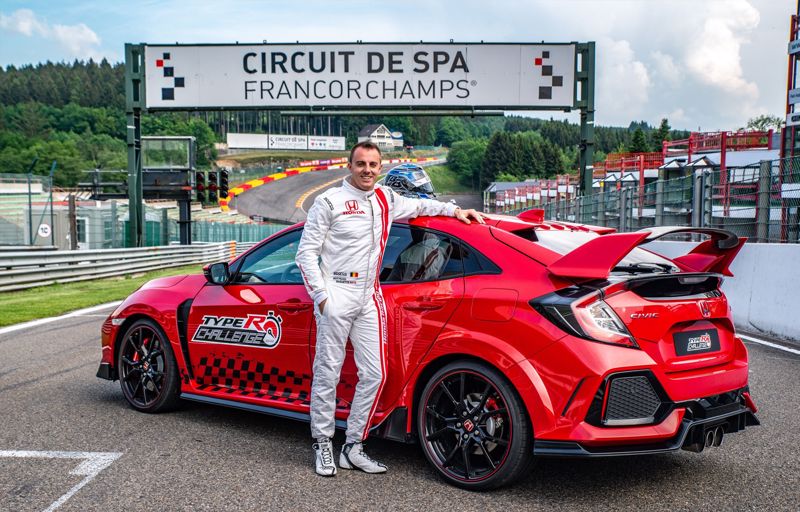 The Spa-Francorchamps circuit is one of the longest tracks in the racing seasons of many categories at 7.004km, and features very fast straights and high-speed corners, along with more technical low-speed sections and significant elevation changes. The class-leading acceleration and outright speed of the Civic Type R’s 2.0-litre VTEC TURBO engine enabled Baguette to exploit the long straights and accelerate quickly out of the sweeping corners.

Speaking about the Type R and the way it handles, Bertrand Baguette said: “With a front-wheel-drive usually you always expect understeer, but this car is so balanced. Straight away you get a lot of confidence as it gives you a lot of feedback through the steering wheel, especially in +R mode. The chassis is very rigid, the rear is very stable and the front is biting really well to give you a lot of front grip. The aero package really helps the car feel planted at high speed, and it’s amazing the level of traction.

“For me as a race car driver, it’s clear that Type R is born for the track, but it also feels just as right on the streets in everyday driving. When I sit in the car, it is very comfortable and the visibility all round is very good.”

Honda set the original benchmark time at Spa-Francorchamps during a similar challenge in 2016, using the previous-generation Civic Type R. It also claimed record lap times at Silverstone, Estoril, and the Hungaroring. The 2018 edition of the challenge will revisit these three tracks through the summer.

The new benchmark time for the Spa-Francorchamps circuit is the third lap record to be claimed by the new Honda Civic Type R. In April 2017, a production development car became the fastest front-wheel drive production car ever around the Nürburgring Nordschleife, with a lap time of 7mins 43.8secs. Last month WTCR driver, Esteban Guerrieri, set a new 2mins 01.51secs lap record for a front-wheel-drive production car at the Magny-Cours GP circuit in France, as part of the Type R Challenge.

The new Honda Civic Type R retains the heritage of Honda’s high-performance hatchback bloodline and is the fastest accelerating and quickest car in its class. The latest car to sport the famous ‘red H’ was part of the all-new tenth-generation Civic’s development programme – the largest in Honda’s history – and was engineered to deliver the most rewarding drive in the hot hatch segment, both on road and on the race track. It features a lightweight, highly rigid bodyshell, low centre of gravity, and sophisticated dual-axis strut front suspension system, which reduces torque steer and enhances on-the-limit cornering.